The Rational Basis® of Happiness Podcast

The wonderful value of experiencing romance, even if your partner decides to end it. 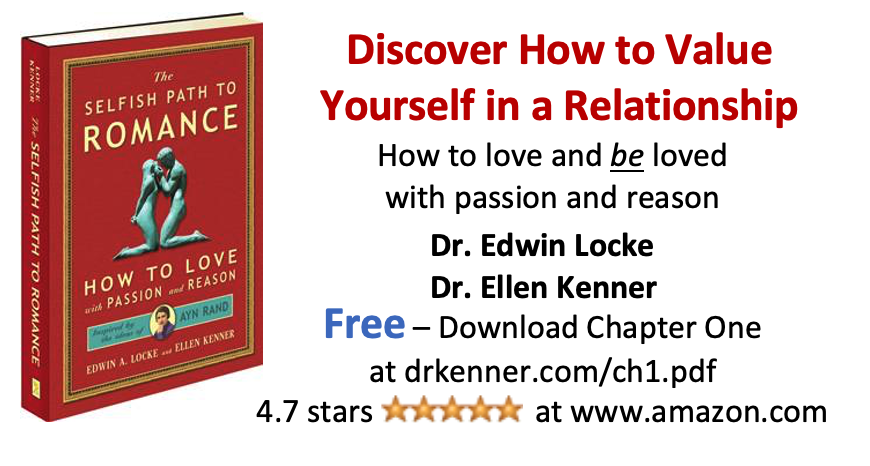 (this is raw unedited text transcribed directly from the audio)

The wonderful value of experiencing romance, even if your partner decides to end it.

(this is raw unedited text transcribed directly from the audio)

Dr. Kenner: Now I normally receive short emails - we ask for short emails - I received a four-page, single-spaced essay from a gentleman and when I finished reading it, I couldn\'t put it down number one. When I finished reading it, I said I\'m going to make an exception and answer his. Now, obviously I can\'t read four pages on the air, so I am going to condense it greatly. This is from Dan. He is a freshman in college now and he says he didn\'t date much in high school and he\'s very introspective in the way he talks about it. He says he didn\'t feel ready. I was very busy with schoolwork. He was a stellar student and he doesn\'t brag about it - in fact, it doesn\'t come in until the end of the email - but he won top awards and he was very high in a very large graduating class, and he seems like such a decent, respectful guy. He said, I didn\'t date much and then I went to a play and in the play, a high school play, he was a senior at the time, I saw a woman who was a heroine in the play, and I fell in love with her. Of course he doesn\'t know at that point whether she\'s the person that she appears to be, so he takes a risk, gets to know her and he\'s a senior - she is three years younger. But she skipped a grade so she\'s a sophomore now. They start dating. He asks her out and they start dating and it goes so beautifully. It\'s his first experience with romance and my guess is you can remember back to the first time you fell in love.

He just feels great with her and then he takes the next step of saying, Will you be my girlfriend? They\'ve been dating for two months now. She says yes and he said he never felt that happy before. Here\'s a guy who never had kind of tasted romance and now he\'s on top of the world.

Now I will read from his email. He said, A week later, she said, \'ďż˝We need to talk.\' My heart sank, because that phrase never turns out well. She tearfully said that she liked me but wasn\'t ready for a relationship. She wanted to remain friends. How could her feelings just stop like that? Have you ever been tortured by that thought? Someone breaks up with you and they don\'t give you a full explanation and so you are left to try to figure out why did they break up with me? How could his or her feelings have just stopped like that? Continuing, he says, It was as if the last two months had never happened and all the time we spent together was just a mistake. So you can see, it causes you to doubt your own mind when you don\'t get a full explanation for when someone breaks up with you. He said he was devastated, he couldn\'t make sense of it, and he\'s trying to think it through. Of course she\'s three years younger and maybe that\'s it, but man, I went so slowly - this is m speaking obviously - I was so gentle with her. I never put any demand for the physical, for the sexual aspect, and I guess he said he called himself a nice guy. He wasn\'t pushing for sex, so he doesn\'t think it was that. Then he just felt like he let her slip through his fingers, that she was the love of his life and she\'s gone now. And he says there\'s an old saying that it\'s better to have loved and lost than never have loved at all. But I didn\'t really believe it before. How could this pain be better than how I felt a few months ago, before I even met Jenna?

As I was laying in my bed, I realized that that brief period of joy that I had with her, even if it was only a couple of months, was worth it. Just being able to spend time with her and look into her eyes, I wouldn\'t trade that for anything. For that short time, everything felt right. I felt like I had finally understood what I had been missing, of course a romantic relationship. I\'m now in college. I can\'t get her out of my mind. He gets an opportunity, goes back home from college and gets an opportunity to actually be with her - not romantically, just as a friend - he\'s invited to her house, and he\'s now asking, How do I handle my relationship with her now? And how do I get her out of my mind if I need to move on and how do I make sense of everything that happened?

Number one, how do I make sense of everything that happened? You are so incredibly introspective, Dan, that you\'ve already made sense of it. She is younger than you. She\'s not had a lot of dating experience. It\'s scary for her to find maybe the partner of her dreams too, so early on in life, and she wants some experience. You guys may connect later in the future sometime. But the beauty of it all is that you didn\'t know anything about romance and you were very thoughtful about it and now you have discovered with this wonderful experience with Jenna something that nobody can ever take away from you, which is that you have the capacity to experience a profound emotion toward another person and to feel worthy of that emotion. You\'re such a good guy, to feel worthy of that yourself. And so the fact that you capture that, you have that for life and you\'re looking for something similar in the future. Of course your standards are quite high now, and that\'s good. When you have high standards, there are fewer people that are available. When you have very low standards, man, the world is your oyster, but you want to value yourself and put in the effort to search for someone else.

You can\'t control her, you can\'t force her mind, so you do want to not wrap your mind around her and give yourself permission to date others, even if they don\'t work out. I dated a lot. My husband dated a lot. And when I found him, the first night I wanted to marry him. But that was after a lot of experience. I had dated someone else earlier on. I was very attracted to him. I was way too young to have a permanent relationship at that point. So I think that\'s the case with Jenna. I think that you are phenomenal and so congratulations to you for your success. If I could say anything to you, I would read the romantic relationships in my favorite book, Atlas Shrugged and see if you can get any tips from that. That\'s by Ayn Rand.